(Wegener’s disease is an autoimmune disorder where the body attacks the veins and arteries going to and from the kidneys, it is usually fatal in 2 years)

An email from a wife of a man with the FATAL Wegener’s disease:

After reading your books and communicating with you nearly two years ago regarding my husband’s Wegeners disease, I wanted to let you know that I took your advice and gave him 100,000 iu/day, plus K2, for more than twelve months, and have now reduced the dosage to 5,000 iu/day, and he is now up to 40% kidney usage from total kidney failure and his Wegeners has slightly improved.

I came across this paper on dr Hulda Clarke’s newsletter relating to vessel regeneration and wondered if you have seen it. I am not a scientist but it seems to me that this is confirmation of your writings, and that the vitamin D3 has been more beneficial than realised because my husband is now called a “miracle” by the doctors treating him who are very surprised that he is still alive two year’s later.

I received the above letter from a woman named Linda a year after I had suggested she try giving her dying husband high dose Vitamin D3 as a last ditch attempt to save him. Imagine my surprise at the time at the great news.

Since that time however, I have continued researching Vitamin D3 and its relation to various (virtually all) autoimmune diseases  and have since discovered that Vitamin D3 deficiency appears to overwhelmingly be the cause of all of humanity’s chronic diseases. I have since  written a paper that details the overwhelming proof of this concept that you must read before you scoff at the idea.  I assure you once finished reading this brief article you will be convinced! >>>Here is the link for it>>>   http://jefftbowles.com/vitamin-d3-deficiency-causes-most-human-diseases/

Once you have looked over the above article, then the following information about Wegener’s should jump out at you and slap you in the face!  it turns out like all the other autoimmune diseases cited in the above article, Wegener’s shows a latitude gradient where the further away from the equator and the weaker the sun the higher the incidence of the disease in its various manifestations. Wegener’s also shows a dramatic increase in incidence since the 1980’s  when we all started using sun block and avoiding the sun- thus  lowering our Vitamin D3 levels on a population wide basis. (See below)

And one more interesting note is that from the 1,000+ cases of high dose Vitamin D3 self experiments I have heard about, it truns out that high dose Vitamin D3 has cured EVERY skin condition it has been put up against  from psoriasis to acne to lupus  to even PRP.  I would bet my bottom dollar that high dose D3 will clear up any Wegene’s-related skin lesions  as well as all of its other manifestations…  So go on and look at the additional evidence below>>

The aim of the study was to determine whether there was evidence for a geographic gradient in the incidence of Wegener’s granulomatosis (WG) and WG-like disease in New Zealand (NZ).

The National Minimum Dataset of the Ministry of Health, NZ was searched for individual patient discharges coded by the International Classification of Diseases 10th Revision, Australian Modification as either M301 (polyarteritis with lung involvement, including Churg Strauss and allergic granulomatous angiitis) or M313 (WG, necrotizing respiratory granulomatosis) for the period 1 January 1999 to 31 December 2003. Data were standardized using the 2001 NZ census.

One hundred and ninety-five patients (95 men) were given a first-time discharge code of either M301 (40 patients) or M313 (155 patients). No gender bias was seen. The rate among Europeans was twice that of NZ Maoris or Asians. The rate of disease peaked in the age band 70-79 years and during winter months. A significant positive north-south geographic gradient was present for M313. No difference in the rate of readmission or time to relapse between geographic regions was found for M313.

A north-south gradient in the rate of patient discharges given a diagnostic code of M313 (WG, necrotizing respiratory granulomatosis) was present in NZ. This finding supports the hypothesis that there is a latitude-dependent risk factor(s) for WG possibly common to both global hemispheres. 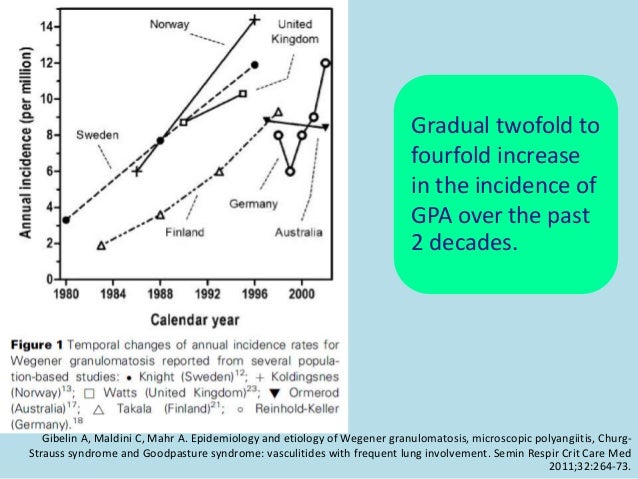