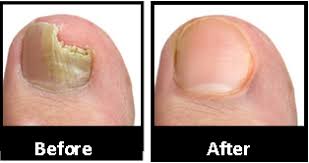 (SEE MY FRIEND’S TOE PICTURE DOWN BELOW AFTER 3 MONTHS OF HIGH DOSE D3-THE CURE IN ACTION!)

What follows is an excerpt from my book about my High Dose Vitamin D3 experiment over a 1-year period. I describe my almost life long quest to cure the yellow toenail fungus (also known as – onychomycosis) that one can pick up from running around barefoot in the gym showers. After years and years of trying various treatments  I accidentally discovered that high dose Vitamin D3 will cure  under-the-nail yellow toe nail fungus. It takes as long as it takes for your toe nails to grow outcompletely-about  9 months in my case. You can put Rogaine (minoxidil) on the nails each day to make them grow out faster if you are in a hurry.

My thoughts on why high dose Vitamin D3 therapy  (20,000 to 50,000 iu per day-see my book for more info) cures yellow toenail fingus  is that it basically charges up your immune system to more aggressively attack that which is non-self  and bad. I also noticed that when I was taking just 4,000 IU of D3 per day over a 10 year period  that I never got sick even once. And I hear this story over and over from others. Just search cold  or colds on the High Dose Vitamin D3 1,000 Case Studies Search Engine and you will see.  link>>>

Taking high doses of Vitamin D3 apparently super charges one’s immune system to also attack virus infected cells  more aggressively. And because D3  also prevents  almost every kind of cancer, it is apparent to me that the immune system is revved up enough to identify cancer cells  as soon as they appear  and long before they form a tumor or spread. You see  Vitamin D3 is not a vitamin  at all but rather a powerful immune system modulating / tissue remodeling hormone that controls 2,000+ of your genes!

What Big Pharma has for you is expensive, dangerous (can destroy your liver in some cases) and often ineffective-the fungus just comes back. Try high dose D3  before you risk getting BigPharma’s Lamisil…Here are the possible side effects>>

Some people who took Lamisil developed severe liver damage that led to liver transplant or death.

In most of these instances, the person had a serious medical condition before taking Lamisil.

You should tell your doctor immediately if you experience any symptoms of liver trouble, which may include:

Skipping doses of Lamisil may increase your risk of further infection that’s resistant to antibiotics.

Follow your doctor’s instructions carefully when taking this medicine.

Before taking Lamisil, you should tell your doctor if you have or have ever had:

If you are taking Lamisil to treat a fingernail or toenail infection, you should know that your fungus may not be completely cured until a few months after you finish treatment.

It will take time for a healthy nail to grow in.

Before taking Lamisil, tell your doctor if you’re allergic to it or if you have any other allergies.

Your doctor may want to perform bloodwork frequently while you are on this medicine. Keep all appointments with your physician and laboratory while taking Lamisil.

Ok, enough of the prelude  here is the excerpt from my book>>>>

I now have another case to report-a friend of mine showed me the most disgusting crooked yellow thick cracked toenail you could ever imagine. Luckily for him it was only on his big toe and one other toe. I told him to buy ½ a kilogram of D3 from Vitaspace for $50 and take 20,000 IU a day. It worked alright, about 3 months into his therapy you can see perfect looking baby-like pure toenails half way along- then the remnants of the nasty yellow toenail at the end. I do have a picture of it and will try to post it to the www.takeD3.com website. Unfortunately he had trimmed the worst of it off before I got the picture-but you’ll get the idea. 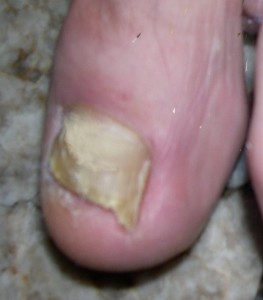 Here is the picture above, is my friend’s toenail in the process of growing out fungus free!

And finally, if you plan on performing your own high dose Vitamin D3/Vitamin K2 experiment  to treat your toenail (or fingernail) fungus  or other condition. You might want to consider buying bulk powder vitamins/hormones  rather than pills given the high doses involved  and the high cost of pills. For example Vitamin K2  can cost  $6,500 per gram if you buy Dr. Mercola’s pills, 30X the cost of gold!! If you buy pure bulk K2 powder  you can get it for just $15 per gram. It’s not just BigPharma who is ripping us off! Find out more from this article>>>>