In the last couple of years, anti-aging researchers have learned that in addition to a number of other factors, a major cause of aging-related disability and disease is caused by chronic inflammation.

Where does this chronic inflammation come from?

From zombie like cells that are neither alive and well nor dead and gone- senescent cells that just sit there, doing nothing, but sending out inflammatory signals to the body and causing other cells to also become zombies. It is like the night of the walking dead!

When we are younger  all our cells live a certain period of time until they no longer work that well and they self-destruct through a process called apoptosis. They are then replaced when a stem cell divides to create a brand new replacement cell, and life goes on just like before.

But when we age, sooner or later  some of those worn out cells do not just die! But they stick around causing all sorts of mischief!

The great news is that researchers have figured out easy ways to eliminate these zombie cells from our bodies – they have discovered senolytics. (the seno- stands for senescent cells, and the “-lytic”  means  it lyses (or chops up) these awful parasites).

Senolytic drugs have been the most promising near-term anti-aging therapy since the ground-breaking paper by van Deursen of Mayo Clinic published in 2011.  The body accumulates senescent cells as we age, damaged cells that send out signal molecules that in turn modify our biochemistry in a toxic, pro-inflammatory direction.  Though the number of such cells is small, the damage they do is great. Van Deursen showed that just getting rid of these cells could increase lifespan of mice by 25%. But he did it with a trick, using genetically engineered mice in which the senescent cells had a built-in self-destruct switch.

After that, the race was on to find chemical agents that would do the same thing without the genetically engineered self-destruct.  They must selectively kill senescent cells, while leaving all other cells unharmed. It’s a tall order, because even a little residual toxicity to normal cells can be quite damaging.  Before last week, the two best candidates were FOXO4-DRI and a combination of quercetin with dasatinib (an expensive, hard to get cancer drug).

Top anti-aging researchers  have written  (here and there) that senolytic drugs are our best prospect for a near-term lift on the road to anti-aging medicine.

Last week, a large research group affiliated with the original May Clinic team published findings about fisetin, the latest and greatest candidate for a senolytic pill, another flavenoid, very close in structure to quercetin and amazingly affordable!

They grew senescent and normal cells in a test tube, then tested 11 different plant-derived chemicals for power to kill the one while leaving the other unharmed.

The winner was fisetin. 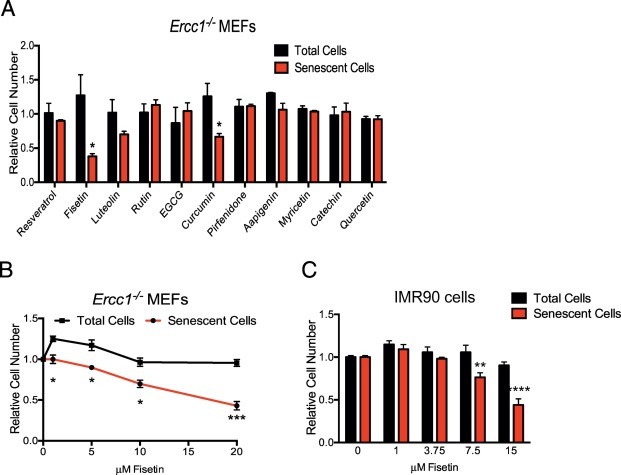 (MEF stands for Mouse Embryonic Fibroblast, the cells that were cultured in the screening experiment.)

Fisetin is especially interesting because it is cheap, easily available, widely-regarded as safe, but not nearly as well studied as quercetin.

They took the winner, fisetin, and subjected it to a series of tests.  They be

gan with in vitro (cell culture) tests and proceeded to in vivo tests with live animals, culminating with an impressive life span assay in mice. 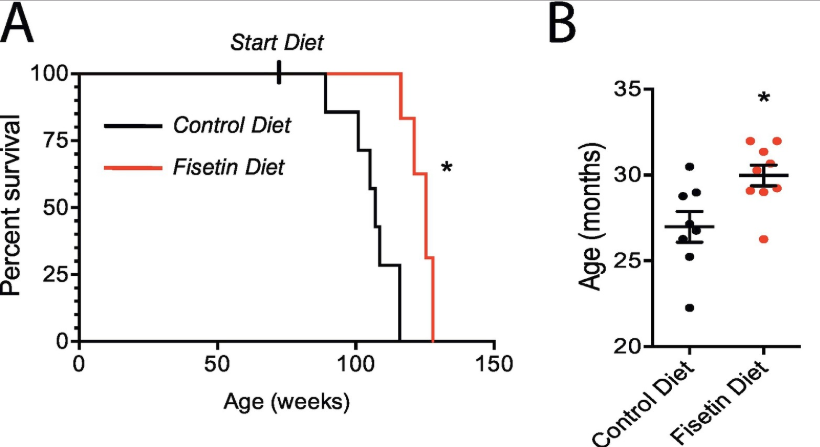 (The runner-up was curcumin, less interesting perhaps only because it has already been extensively studied.  The curcumin molecule is unrelated to quercetin or fisetin, and is not a flavenoid.

One can’t help but wonder if they had subjected curcumin to the same thorough testing that they reserved for fisetin, how would curcumin have fared?)

The paper’s principal findings were:

It makes sense that senolytics should be taken periodically, not continuously.  A high dose can be toxic to existing senescent cells, and then getting out of the way, it can allow normal cells to recover from any damage.  This sounds like good theory, but different dosing regimens have not been tested experimentally. In fact, the new paper reports positive results from both high episodic dosing and lower everyday dosing.

The Mayo group had previously tested fisetin, and found it effective in killing some kinds of human senescent cells but not others.  In previous tests, fisetin was found to be effective in senescent fat cells (pre-adipocyte, white adipose tissue), and that is where it was primarily tested in the new studies.  They note that the episodic treatment and short half-life suggest that the benefits of fisetin come from its senolytic action, rather than other actions as an antioxidant and signal molecule.  They emphasize that clearing senescent white blood cells and making room for new, active white blood cells are activities that enhance the benefits of fisetin, since white blood cells contribute to clearing the remaining senescent cells.

Fisetin has previously been shown to have anti-cancer activity and to inhibit inflammatory signals directly.  Here is a review of benefits of fisetin from three years ago.  Drugage lists just two previous lifespan studies with fisetin, with encouraging results from yeast and fruitflies.

If we choose to take fisetin at this stage in the science, we are early adopters, and our main concern ought to be safety.  There is little doubt that killing senescent cells will be beneficial. But what is the toxic burden of fisetin, and what dosage can we safely take without risk of damage to normal cells?  The current study covers a lot of ground but doesn’t answer this question, apparently because they are convinced that fisetin is quite safe.

Strawberries, apples, grapes, and onions all contain fisetin, but at low levels compared to a senolytic dose.  For example, the highest food concentration, 160 ppm, is found in strawberries.  A half pound of strawberries yields 36 mg of fisetin.  We’re still guessing at the therapeutic dose, based on mouse studies, and the experimental dosage in human trials is about 1,000 to 1,500 mg (based on this clinical trial), the content to 30-40 pounds of strawberries on each of two consecutive days.

In the best cases, fisetin was shown to reduce senescent cell burden by 50% and up to 75% in cell cultures.  This is a good start, and encourages us to think we can do better by combining fisetin with other agents, or perhaps with fasting.

Fisiten pills are widely available from various internet-based supplement companies, but can you really be sure you are getting pure fisetin? The article below describes how up to 79% of supplements tested did not have the listed active ingredient as the primary substance in them.

When you purchase pills you are just guessing as to the quality and purity and paying usually $4 to $6 per gram  for who knows what. If you don’t want to gamble and purchase guaranteed pure fisetin powder for $1.70 per gram read about the amazing Peter and Vitaspace CLICK link below!>>